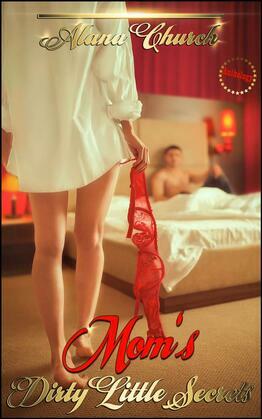 by Alana Church (Author)
Buy for €7.49 Excerpt
Fiction Erotica Romance Adult
warning_amber
One or more licenses for this book have been acquired by your organisation details

“Chris.” Even with his back turned, he could sense his mother's aggravation. “We’re inside a temple in the middle of the desert. There’s no one around for twenty miles in any direction.” Her voice sharpened. “So can you stop acting silly and get undressed? The pool is big enough for two, and the more time we waste bathing, the less time I have to actually do what we came out here to do.”

No point in arguing. Chris sighed and kicked off his shoes and pulled his t-shirt up over his head. In less than a minute, his pants and socks had joined them on the floor.

“All right,” he said, turning around and shoving his boxers down to his feet. “Have it your way.”

“I intend to,” his mother smiled.

Chris caught his breath. Candlelight shone on the curves of his mother’s body, making her appear as if she had been gilded in gold leaf. Her black haired tumbled in waves around her shoulders and her chest. Thankfully, it covered her breasts. But there was no hiding the womanly cleft between her legs, or the rapt look in her eyes.

“There’s steps here,” Zahira said happily. “Oh, that makes things easier. This must have been a ritual bathing pool. Think about it,” she said, as she immersed herself completely. Standing, the water reached the bottom of her ribcage. “A person comes out here to worship. But before they can, they have to be shriven.” Her voice went low, almost chanting. “Purified. Sanctified. Water has always been seen as a cleansing agent in religion. They step out of the sacred pool and…”

“And what?” Chris asked, when the silence had become almost unbearable.

His mother smiled at him. “Well, that’s what we are to find out, isn’t it?” She held out a hand to him, water dripping off her fingers. “Come in, my child.”

Luckily, by concentrating on his mother’s voice, Chris had been able to keep his body’s instinctive reaction to a naked woman from occurring. The flagstones of the pool were gritty under his feet, and he thought he could sense the faint pressure of water welling up between them. What a miracle it must have seemed. This gift of water in the desert.

“It sure is.” His mother turned, pulling her hair over her shoulder so her back was bare. “Wash my back?”

A cake of soap was slapped into his hand. “Just do it, Chris.”

He pressed his lips together, but lathered up his hands and began to soap her back. Her skin was soft and warm, unlined by age. “Oh, that’s good,” she sighed. “A little higher, please? There’s a spot that I can never quite reach. Yes. Right there.” Her voice sank into a sigh, redolent of hedonistic pleasure.

To Chris’ shame and mortification, he felt himself growing aroused. The feel of his mother’s soap-covered skin under his fingers, the warm water lapping around his waist, the small purring sounds she made as he washed her, all made his body grow hot and tense.