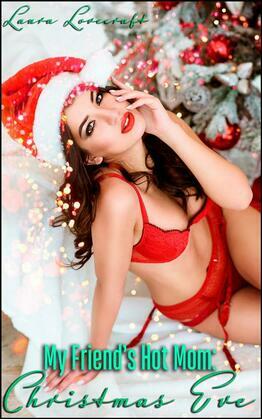 by Laura Lovecraft (Author)
Buy for €2.99 Excerpt
Fiction Romance Adult Erotica
warning_amber
One or more licenses for this book have been acquired by your organisation details

Evelyn Chambers has been the object of Sean's fantasies for as long as he's known her. A woman so hot that even with a son his age, she still works at a strip club. Going by the nickname Christmas Eve because she's the gift that keeps on giving, Sean's mother doesn't even want him near her, but he can't resist when she invites him over with the promise of spreading a lot more than holiday cheer!

Another look at the clock; 10:00. Maybe after a certain point she'd think he wasn't coming. She'd be pissed, probably calling him a spineless little kid, then going to sleep. She'd be right, what was he afraid of?

That woman was waiting for him, and all he had to do was man up. Chet was his friend, but he was also treating Evelyn, his own mother, like crap because she was having fun, and what did he care if his parents ended up finding out? He was twenty, what were they going to do, disown him?

His phone vibrated on the nightstand and he picked it up to see Evelyn had sent him a text.

"Oh, man," he whispered as he opened it to the selfie she'd taken in the mirror.

Evelyn wore a short Santa coat complete with white trim and black buttons. Only the three middle buttons were closed however, leaving both her stomach and upper chest exposed.

The red material was a sexy contrast to the round tops of her creamy breasts and the camera flash caught the silver pendent dangling from her naval. A red ribbon encircled her neck with a silver bow attached to the front and a Santa hat sat at an angle on her head, her long raven black hair flowing from beneath it.

The hem of the coat was low enough to show off the end of her stockings and the garters attached to them, the red straps framing her toned thighs just as he'd imagined they would.

The beneath it said:

He scrolled back to the picture, now looking at her face. Evelyn's lipstick was as red as the coat, and she'd added red eyeshadow above her thick black eyeliner. She'd applied blush as well, and like the rest of her make up, rather heavily.

Her free hand was positioned on her hip and encased in a red glove. Sean imagined the gloves would be velvet or some other soft material, then wondered what they'd feel like touching him.

The phone vibrated again, and this time it was a video. He clicked it to see Evelyn sucking on end of one of those thick footlong novelty candy canes.

She made soft moaning sounds as she took it deeper, her red lips wrapped tightly around the candy. She removed it from her mouth and fluttered her tongue rapidly along the tip before asking;

"Baby, are you really going to make this the only hard thing I have in my mouth tonight?"

He received another text, this one a picture of Eve sitting backwards on one of her dining room chairs. Her arms folded over it, and her widespread legs visible on either side; a classic stripper pose.

"Remember, my back door is open."

"Screw it," Sean kicked the comforter off.