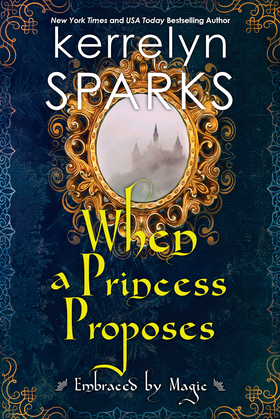 When a Princess Proposes

by Kerrelyn Sparks (Author)
Buy for $13.56 Excerpt
Fiction Fantasy Historical Romance Fantasy Paranormal
warning_amber
One or more licenses for this book have been acquired by your organisation details

Aerthlan’s five Embraced queens have reigned for twenty years, in peace secured by the power of their magic. But now a new and insidious threat has appeared, to test a new generation.

All Princess Eviana needs is an escape. Possessed of an unfortunate and unusual Embraced gift, which she’s been banned from using, she required no training. Now, her overprotective parents want her to wed. As a result, the palace is crammed with obnoxious noblemen. . . . Until Quentin, the enigmatic eagle shifter and royal spy, maneuvers several of the unsuitable suitors into revealing their most embarrassing secrets before the court. Finally, Eviana has an excuse to free herself. If only her family knew the blow that’s shaken her: golden-eyed Quentin’s refusal to let her near . . .

Heroic, but low born, Quentin’s infatuation with Eviana is as inappropriate as it is unshakable. He must keep away from her, for his own sake. But after a series of suspicious deaths, and the princess’s narrow escape from kidnapping, Quentin knows that only together can they expose the danger stalking Aerthlan’s Embraced. On foot, in disguise, they’ll need trust and quick wits to uncover the vicious conspiracy closing around them. But finding the truth might break down their own defenses as well . . .

Praise for How to Love Your Elf

“Satisfying chemistry, a playful sense of adventure, and the threat of more danger to come keep the pages turning. Readers will revel in this fun, fast‑paced fantasy romance.”
—Publishers Weekly