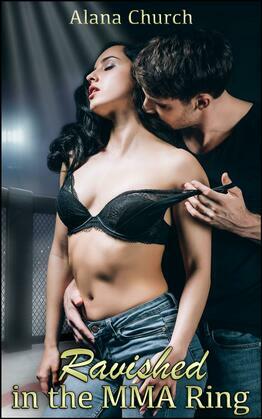 Ravished In The MMA Ring

by Alana Church (Author)
Buy for €2.99 Excerpt
Fiction Erotica
warning_amber
One or more licenses for this book have been acquired by your organisation details

Jack couldn't believe it when his MMA hero accepted his challenge to spar. Demi DeVito was a south Boston legend. But when he holds his own with the sexy champ, things turn hot and heavy! Demi isn't going to take no for an answer. Jack lasted three minutes with her in the ring. How long can he last in bed?

"What's the matter, big boy," she whispered, letting him fall out of her mouth. Her hand stroked his sac. "Can't get it up?"

"Considering a couple of minutes ago you were trying to choke me unconscious, you're lucky I can still stand," Jack replied boldly, startled out of his usual shyness.

"Oh, I'd rather choke on this." And then she took him in again, bobbing on him rapidly. A contented hum escaped her lips as he began to harden. "My trainer sent me back here after I lost the de la Cruz bout," she said, the next time she came up for air. "Told me I was spending too much time balling all the awesome bodies I was hanging out with, and not enough time working on my technique." She ran a teasing tongue around his tip, smirking as his shaft leaped up eagerly. "The hell does she know? The more I screw, the hornier I get. And the hornier I get, the harder I fight. Because there ain't nothing in the world more fun than kicking the crap out of some loser and then getting laid right after."

Jack didn't answer. But it didn't seem that Demi expected him to. He was fully erect now, and he hoped to sweet Jesus that Sonny hadn't forgotten anything and came back to the gym to pick it up, because he was sure they made one hell of a tableau. Him with his shorts around his ankles and basically nothing else, and Demi DeVito stark naked on her knees in front of him.

"You need it," she muttered, licking his shaft. "You thought you were lucky to last three minutes? That ain't nothing compared to what I'm going to do to you now."