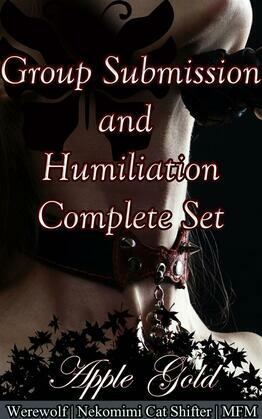 by Apple Gold (Author)
Buy for €7.49
Fiction Erotica Romance Adult
warning_amber
One or more licenses for this book have been acquired by your organisation details

In this Group Submission and Humiliation Complete Set, innocent young Cat Shifters fall into the clutches of strong Alpha Werewolves and their numerous pack members. Here, you will find:

Cat Shifter for Public Use

When Alpha Werewolf Liam is gifted a Cat Shifter for his enjoyment, he did not anticipate how hard and fast he would fall for her. She is small and weak, fragile in every way and he is filled with an inexplicable need to hold her and keep her safe, shelter her. He wants to own her, mark and ruin her in every way imaginable. Then, he allows his men a taste of her, fill her up and use her.

Public Sharing of a Cat Shifter

Nessa is eighteen-years-old and can take care of herself, but she finds herself placed into a special Cat Shifter School where she will be kept safe. She quickly learns that despite the chaste kisses and lingering touches, the people at the School are all Werewolves and are much more than they appear to be. They’re all just waiting for the right time to pounce and do what they want with her.

What Anya wants is abnormal. Her fantasy doesn't just involve a single Werewolf, but an entire pack, all using her the way they want. She fantasizes about too many men trying to get to her, and then all succeeding, and she dreams of being touched everywhere. She imagines being pushed around, degraded and humiliated, filled in all the ways imaginable…

He stares at his beautiful little mate, tucked in another man's arms, nuzzling against his neck and breathing in as her fingers curl around

her tail, petting it in a self-soothing notion. She's completely unaware of the rage in his veins, the bitter, terrible jealousy he's feeling at the sight of her easy trust.