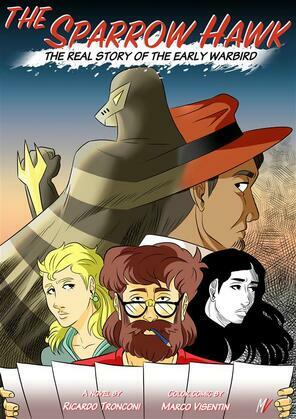 by Ricardo Tronconi (Author)
Buy for €4.99 Excerpt
Fiction Comics & graphic novels Superheroes
warning_amber
One or more licenses for this book have been acquired by your organisation details

The only useful clue leading back to a non-conventional superhero's actions is a sparrow hawk's feather (or Early Warbird), left behind as a kind of signature. Nobody can guess what's beneath this ambiguous presence, who chastens men guilty of violence against women in mysterious ways (painfully, in any case).

The comic artist Ju, after a chance meeting with Victor Patillas, founder of a publishing company, takes the job as an illustrator and that's when he embarks on a journey, plunging into the Sparrow Hawk's world, the main character in the comic series he's expected to illustrate. Thus the character of Ketty comes to life, she, a victim of abuse from her brother-in-law, permanently haunted by that traumatic experience and by a family fully convinced she is the cause of it all. Taking shape as a simple illustration at first, Ketty and her friends become more and more real, finally blending into reality itself.