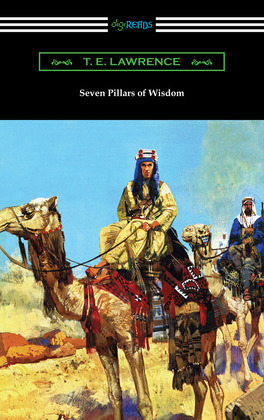 by T. E. Lawrence (Author)
Buy for $9.99 Excerpt
Nonfiction History
warning_amber
One or more licenses for this book have been acquired by your organisation details

First published in 1926, “Seven Pillars of Wisdom” is the fascinating and brutal account of the Arab Revolt of 1916 to 1918 by T. E. Lawrence, more famously known as “Lawrence of Arabia”. Written, rewritten, and edited over a period of several years from 1919 to 1926, Lawrence recounts his time serving in the British Forces in North Africa when he was based in Wadi Rum. He describes his role assisting in the organization and carrying out of attacks on Ottoman forces and how the troops were aided by the support of tribesmen and men such as Arab leader Emir Faisal. Lawrence developed a close relationship with many of the native people and historians have speculated over the years that Lawrence’s poem and tribute at the beginning of the work may be written for a young Arab boy from Syria, who died at age 19 just before the offensive to liberate Damascus. Highly personal and autobiographical, Lawrence’s account is a gripping and dramatic memoir of war and adventure on a grand scale and remains an important first-hand account of a tumultuous and violent time in history.