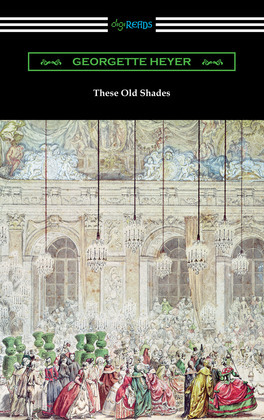 by Georgette Heyer (Author)
Buy for $7.99 Excerpt
Fiction Classics
warning_amber
One or more licenses for this book have been acquired by your organisation details

First published in 1926, “These Old Shades” was the first great commercial success by the British novelist Georgette Heyer, who is widely credited with inventing the Regency romance genre. The story concerns the notorious and cold Duke of Avon, Justin Alastair, and his rivalry with his enemy, the Comte de Saint-Vire. Avon encounters a young boy, Léon, who is running from his abusive brother, a tavern keeper. Struck by the boy’s uncanny resemblance to the hated Comte, Avon buys him from his brother and employs the boy as his page, parading him around parties and other society events in full view of the Comte and his wife. The truth is soon uncovered, Léon is in fact a girl named Léonie and is actually the legitimate child of the Comte and his wife. While Avon is intent on his plan to reveal the Comte’s duplicity and ruin him publicly, he is charmed by Léonie’s kindness, falls in love, and becomes a changed man. “These Old Shades” showcases Heyer at her romantic best and remains a charming and entertaining read for all fans of historical romances.