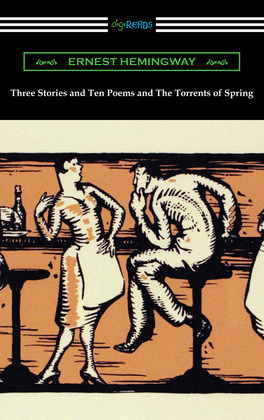 Three Stories and Ten Poems and The Torrents of Spring

by Ernest Hemingway (Author)
Buy for $6.99 Excerpt
Fiction Classics
warning_amber
One or more licenses for this book have been acquired by your organisation details

First published in 1923, “Three Stories and Ten Poems” marked the beginning of the fictional writing career of one of the world’s most famous writers, Ernest Hemingway. This short collection is marked by the story “Out of Season” in which Hemingway employed autobiographical elements and his “theory of omission” or the “iceberg theory”. Also included here in this edition is Hemingway’s first novella, “The Torrents of Spring”. Appearing a few months before his more commercially successful novel “The Sun Also Rises”, this novella was first published in 1926. The story is set in Michigan and concerns the love lives of two men who work in a factory together. Both are seeking the perfect wife and both have varying degrees of success in their endeavors. These romantic dramas are a comical premise however, and Hemingway spends the bulk of the book making fun of the popular writers of his day in hilarious and witty fashion. Written as a parody of Sherwood Anderson’s “Dark Laughter”, Hemingway also spoofs the works of James Joyce, John Dos Passos, and D. H. Lawrence. Together these works show the early development of one of the most notable authors of the twentieth century.