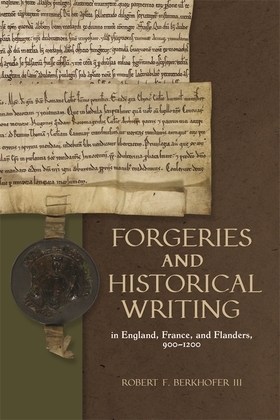 Forgeries and Historical Writing in England, France, and Flanders, 900-1200

by Robert F. Berkhofer Iii (Author)
Buy for $29.95 Excerpt
Nonfiction History Medieval
warning_amber
One or more licenses for this book have been acquired by your organisation details

What modern scholars call "forgeries" (be they texts, seals, coins, or relics) flourished in the central Middle Ages. Although lying was considered wrong throughout the period, such condemnation apparently did not extend to forgeries. Rewriting documents was especially common among monks, who exploited their mastery of writing to reshape their records.

Monastic scribes frequently rewrote their archives, using charters, letters, and narratives, to create new usable pasts for claiming lands and privileges in their present or future. Such imagined histories could also be deployed to "reform" their community or reshape its relationship with lay and ecclesiastical authorities. Although these creative rewritings were forgeries, they still can be valuable evidence of medieval mentalities. While forgeries cannot easily be used to reconstruct what did happen, forgeries embedded in historical narratives show what their composers believed should have happened and thus they offer valuable access to why medieval people rewrote their pasts.

This book offers close analysis of three monastic archives over the long eleventh century: Saint Peter's, Ghent; Saint-Denis near Paris; and Christ Church, Canterbury. These foci provide the basis for contextualizing key shifts in documentary culture in the twelfth century across Europe. Overall, the book argues that connections between monastic forgeries and historical writing in the tenth through twelfth centuries reveal attempts to reshape reality. Both sought to rewrite the past and thereby promote monks' interests in their present or future.