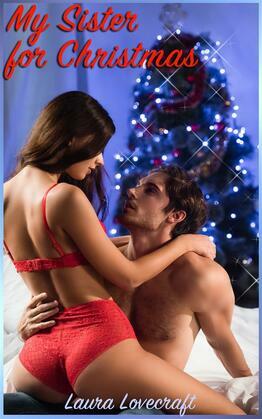 My Sister For Christmas

by Laura Lovecraft (Author)
Buy for €2.99 Excerpt
Fiction Erotica Romance Adult
warning_amber
One or more licenses for this book have been acquired by your organisation details

While attending a bachelor party, Blake is shocked to discover his sister, Tina, is a stripper. Rather than be appalled, he is strangely aroused and has been obsessed with her ever since. When a blizzard traps them together in a motel, Blake risks their relationship, confessing his taboo desire. Not only is Tina not upset, but gives him a special gift, the gift of his sister for Christmas!

Raven dropped from the pole and flipped her hair over her shoulder to expose her back. Blake had just opened his beer to take a sip but stopped before the bottle reached his lips.

It was the same tattoo his sister had. Blake blinked as he watched Raven work her way back down into a crouch, this time showing off her ass in the painted on shorts.

"Damn, that's an ass!" Jimmy whispered. "And those legs! Bet she's been dancing a long time."

Blake nodded, but his eyes lifted from her ass to her left arm and a tattoo of a Succubus.

Two tattoos the same as his sisters. Coincidence, it had to be, neither was a custom piece, but something Tina had seen and liked. The lights changed from deep red to a bright spotlight showing off the dancer's skin which was fair bordering on ghostly.

Just like his sister, who could go an entire summer with barely any color because she hated the sun and heat; earning her the nickname Wednesday Adams because of her white complexion.

No, what was he thinking? The goth look was a common. But there was an uneasy feeling in his stomach as he watched Raven slide down the pole but keep her ass in the air until her head was touching the floor.

The crowd cheered as she twerked for Nick. People from the tables closest threw money at the stage, some landing on it, some on the floor around it.

Raven straightened, and whipped around in a circle, her leg going up over her head. She hooked her knee around the pole, and swung her other leg up, going upside down and into a gravity defying spin.

Raven sprung off the pole, landing smoothly on the absurdly high heels, and gripping the sides of her shorts, shimmied side to side, pushing them down. Beneath the shorts she wore a red G-string that exposed the cheeks of her ass, and Jeff pounded the table.

Getting the shorts down to the floor, she spun and kicked them off the stage at Nick, who caught them, and pressed the crotch to his face earning clapping and laughter from the onlookers.

Raven unclasped the belt and snapped it around the pole like a whip, catching the other end in her left hand. She leaned back, now balanced on just the heels of the boots and spun in increasingly fast circles.

She released the belt, and spun so quickly away from the pole. People gasped, thinking she was going to fall off. Instead, came to a stop at the edge of the stage facing Nick.

Her hands went behind her back, and a hush fell over the crowd, as she pumped her arms up and down, causing the straps to slid down past her elbows. Slipping her right leg up so her foot was planted on the floor, she shoved herself up and into a spin.

Her bra sailed into the crowd, but her other hand went to her head. When she completed the spin to face the crowd, she'd pulled the hat from her head, using it to conceal her breasts, but finally revealing her face.

Raven was his little sister.