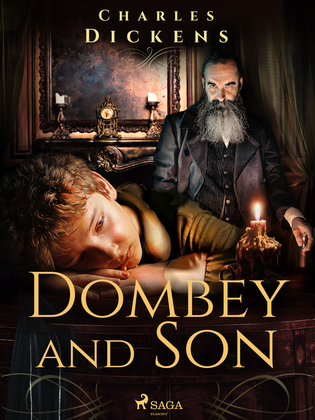 ‘Dombey and Son’ follows Paul Dombey, the wealthy owner of a shipping firm who is frustrated by his lack of a male heir. His disappointment and frustration triggers his own financial and personal downfall as he spurns the love and support of those around him. It is a brilliant character study as this complex and interesting character comes to grips with his own personal failings.

The tragedy in this story comes from Paul’s inability to reconcile himself with the world around him, refusing to accept his circumstances until his life takes a devastating turn. Dickens weaves a captivating plot in this melancholic tale, sprinkled with his trademark satire and wit, it is a brilliant and engaging read, perfect for anyone who loves to immerse themselves in world of stark reality.

Charles Dickens (1812-1870) was an English author, social critic, and philanthropist. He achieved wide spread popularity and success during his lifetime , and is recognised as a literary genius to this day. He created some of the world’s best fictional characters and is regarded as the best writer of the Victorian era. His writing has inspired its own literary theme and genre with works today being described as ‘Dickensian’ thanks to his contribution to writing. His most famous novels include Oliver Twist (1839), David Copperfield (1850), and Great Expectations (1861), all of which have been adapted to majorly successful and loved film adaptations.