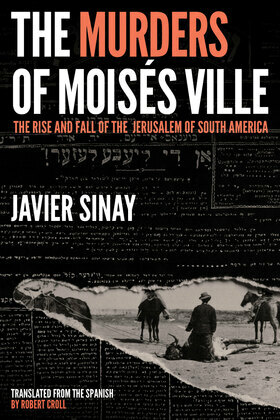 The Murders of Moisés Ville

The Rise and Fall of the Jerusalem of South America
by Javier Sinay (Author), Robert Croll (Translator)
Buy for $14.99 Excerpt
Nonfiction History 1799-before 1945 History by country South America Social science Sociology
warning_amber
One or more licenses for this book have been acquired by your organisation details

Award-winning journalist Javier Sinay investigates a series of murders from the nineteenth century, unearthing the complex history and legacy of Moisés Ville, the “Jerusalem of South America,” and his personal connection to a defining period of Jewish history in Argentina.When Argentine journalist Javier Sinay discovers an article from 1947 by his great-grandfather detailing twenty-two murders that had occurred in Moisés Ville at the end of the nineteenth century, he launches into his own investigation that soon turns into something deeper: an exploration of the history of Moisés Ville, one of the first Jewish agricultural communities in Argentina, and Sinay’s own connection to this historically thriving Jewish epicenter.

Seeking refuge from the pogroms of Czarist Russia, a group of Jewish immigrants founded Moisés Ville in the late 1880s. Like their town’s prophetic namesake, these immigrants fled one form of persecution only to encounter a different set of hardships: exploitative land prices, starvation, illness, language barriers, and a series of murders perpetrated by roving gauchos who preyed upon their vulnerability. Sinay, though a descendant of these immigrants, is unfamiliar with this turbulent history, and his research into the spate of violence plunges him into his family’s past and their link to Moisés Ville. He combs through libraries and archives in search of documents about the murders and hires a book detective to track down issues of Der Viderkol, the first Yiddish newspaper in Argentina started by his great-grandfather. He even enrolls in Yiddish classes so he can read the newspaper and other contemporaneous records for himself. Through interviews with his family members, current residents of Moisés Ville, historians, and archivists, Sinay compiles moving portraits of the victims of these heinous murders and reveals the fascinating and complex history of the town once known as the “Jerusalem of South America.”

“Sinay acknowledges the impossibility of fully separating legends from facts. . . but his diligence has produced as definitive an account as possible of what actually happened during this bloody period. This nuanced search for truth should have broad appeal.”
—Publishers Weekly, starred review

"I greatly admire Javier Sinay's enlightening and humane account of his sleuthing—the disinterment of a violent episode of buried history—now no longer forgotten. Its implications resonate far beyond the borders of Argentina."
—Paul Theroux, author of The Mosquito Coast and Under the Wave at Waimea

“In the pursuit to understand his own past, while unraveling the mysteries surrounding Moisés Ville, Javier Sinay has created an unflinching portrait of the first Jewish community in Argentina, who, despite enormous challenges, life-threatening privations, and demeaning persecution, endured to pave the way for others seeking a new life in Argentina…Sinay has demonstrated once again, that history must be preserved no matter the cost – for ourselves, as well as for future generations.”

“ What begins as an exercise in historical sleuthing evolves into a more ambitious exploration of Argentine Jewish history and identity…Sinay doesn’t need to create a direct connection to this tragic present. It is more than enough that he refuses to flatten the Moisés Ville murders to fit a totalizing narrative of antisemitic violence in Argentina. In so doing, he not only rejects facile conceptions of Jewish victimhood, but also defies the Zionist idea that, by virtue of having suffered in one country, Jews are automatically entitled to land in another.”