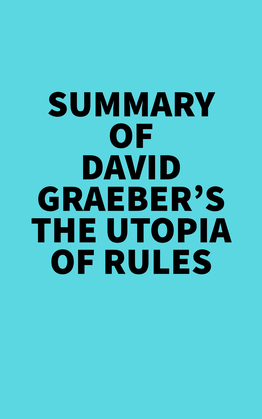 Summary of David Graeber's The Utopia of Rules

by Everest Media (Author)
Buy for $3.99 Excerpt
Nonfiction Social science Political science Labor & industrial relations
warning_amber
One or more licenses for this book have been acquired by your organisation details

#1 I had to take care of my mother, who was having a series of strokes. She had saved up six thousand dollars, which was enough to qualify her for Medicaid, but she needed power of attorney over her bank account in order to pay her monthly rent bills.

#2 The next week, the notary duly appeared to officially complete the paperwork. I was surprised the bank insisted on having its own separate power of attorney form, but I figured the notary knew what she was doing. The bank would not accept the forms in their current state, so my mother died soon after.

#3 One can fairly say that bureaucracies are utopian forms of organization. They set demands they believe are reasonable, and then blame the individuals when they fail to live up to them.

#4 I was forced to confront the fact that I was doing a lot of foolish things because I was trying to understand and influence the government officials who had the power to change the rules. I realized that I needed to stop worrying about how not to seem like I was rubbing notaries in their faces, and just focus on the task at hand.