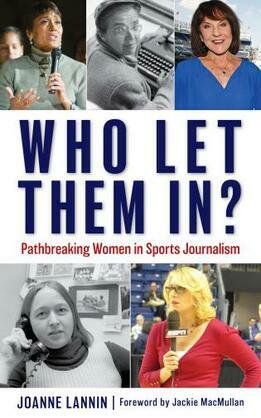 Who Let Them In?

An inspiring look at the women who broke the glass ceiling in sports journalism.

Women in sports journalism have faced an uphill battle to succeed within the “old boy” world of sports. The early trailblazers faced colleagues who ignored them, athletes who tried to humiliate them, fans who ridiculed them, and executives who kept them from doing their jobs—challenges many still face today.

In Who Let Them In? Pathbreaking Women in Sports Journalism, Joanne Lannin recounts the stories of the tenacious and resilient female sportscasters and writers who paved the way for those that followed. Exclusive interviews with such pioneers as CBS Sports’ Lesley Visser, NFL Today’s Andrea Kremer, and Baseball Hall of Fame inductee Claire Smith reveal the many challenges these women faced as they sought to break down the gender-based barriers that kept them from press boxes, locker rooms, and broadcast booths. And while great strides have been made in the sports world to correct the gender imbalance, Lannin discusses how misogyny and sexual harassment continues to permeate the industry even today.

Who Let Them In? offers compelling insight into how women sports journalists broke into this male-dominated field and managed to stay there, despite the many obstacles put in their way. It shows the sacrifices and commitment it takes to succeed in sports journalism and discusses what the future may hold for women in a media landscape that continues to evolve almost daily.