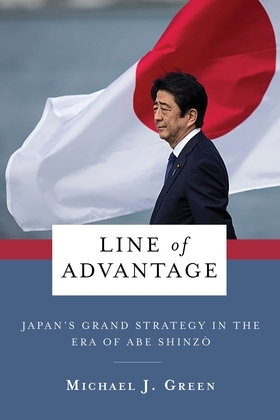 Japan’s Grand Strategy in the Era of Abe Shinzō
by Michael Green (Author)
Buy for $34.99 Excerpt
Nonfiction History History by country Asia Japan Social science Political science International relations Diplomacy
warning_amber
One or more licenses for this book have been acquired by your organisation details

No other country has devised a grand strategy for managing China’s rising economic and military power as deliberately or successfully as Japan. Seeking to counter Chinese ambitions toward regional hegemony, Japan has taken an increasingly assertive role in East Asia and the world. During the tenure of Prime Minister Abe Shinzo, the country pursued closer security cooperation with the United States and other democracies, established a more centralized national defense system, and advanced rules and norms to preserve the open regional order in the Indo-Pacific that is crucial to its prosperity and survival—all while managing an important economic relationship with China.

In Line of Advantage, Michael J. Green provides a groundbreaking and comprehensive account of Japan’s strategic thinking under Abe. He explains the foundational logic and the worldview behind this approach, from key precedents in Japanese history to the specific economic, defense, and diplomatic priorities shaping contemporary policy toward China, the United States, the two Koreas, and the Indo-Pacific region. Drawing on two decades of access to Abe and other Japanese political, military, and business leaders, Green provides an insider’s perspective on subjects such as how Japan pursued competition with China without losing the benefits of economic cooperation. Assessing the strengths and weaknesses of Japan’s new active role, Line of Advantage sheds new light on a period with profound implications for the future of U.S. competition with China and international affairs in Asia more broadly.