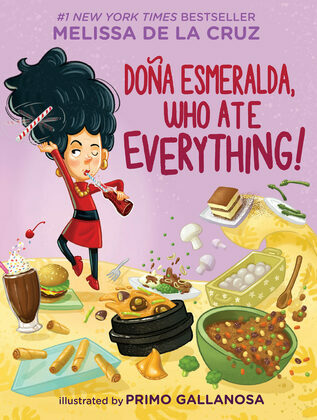 Doña Esmeralda, Who Ate Everything

Once upon a time, in the middle of a group of seven thousand happy islands named after King Philip of Spain, there lived a lady named Doña Esmeralda.

She had a big bouffant hairdo and was much smaller than you.

And she was always hungry...

And so begins the wickedly hilarious tale of one very old, but very stylish little lady who loves to eat, but can only find the ooey, gooey, mushy, smelly leftovers of naughty children to nosh on. But what happens when Doña Esmeralda finds out about all the tasty treats that children do eat? Hold on to your hairdos as Esmeralda eats everything in sight in a cumulative read-aloud inspired by stories from author Melissa de la Cruz's childhood in the Philippines!