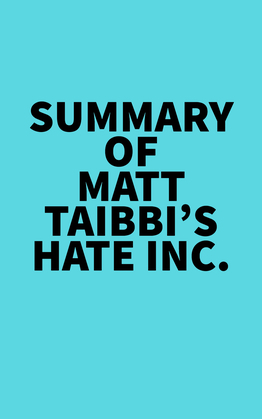 by   Everest Media (Author)
Buy for $3.99 Excerpt
Nonfiction Human science Language arts & disciplines Journalism
warning_amber
One or more licenses for this book have been acquired by your organisation details

#1 Nobody in the media seems to understand why Americans have little to no trust in them. The media has been experiencing record profits since Donald Trump labeled them the enemy of the people, and many in the press wear their public repudiation as a badge of honor.

#2 The pretense that the presidential campaign was anything but an insane, absurdist reality show was completely gone by the time Trump got involved. Reporters openly enjoyed the ridiculousness of it all.

#3 As Trump began to dominate the 2016 election season, media members began to openly shame themselves for having helped him get this far. They claimed that they should have covered his insanity more thoroughly.

#4 By 2016, it was clear that Trump was created by the media. Reporters began to sound sheepish notes, as if chastened by public displeasure. They began to talk about recasting their whole approach to Trump.