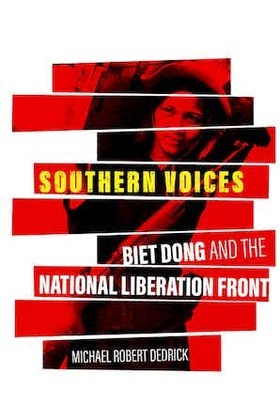 Southern Voices: Biet Dong and the National Liberation Front presents oral histories from former members of an elite squad of Viet Cong operatives, focusing on their experiences during what is known, in Vietnam, as the American War. Author Michael Robert Dedrick conducted interviews with eight former Biet Dong (the equivalent of Ranger or Special Forces divisions in the US military) and sheds new light on this clandestine group.

Best known for their role in the 1968 Tet Offensive, the Biet Dong in the south were organized units hiding in plain sight. Members included farmers, tradespeople, agents, spies, monks, students, intellectuals, and journalists—both young and old, men and women. They were highly patriotic, politically motivated, and very secretive, operating in three-person cells under aliases. Their voices and experiences emerge in this bilingual volume.

In recent years, historians have made greater use of Vietnamese primary sources and transformed the study of one of the twentieth century's most controversial conflicts. Ably curated by Dedrick—who also offers his own perspectives as a veteran and peace activist—the firsthand accounts in Southern Voices add a new layer to the history of the Vietnam War and its aftermath.