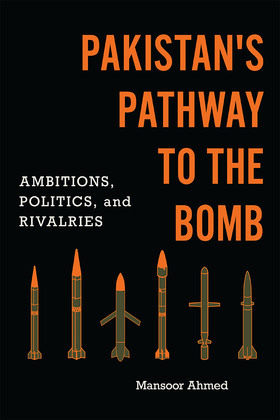 Pakistan's Pathway to the Bomb

In Pakistan’s Pathway to the Bomb, Mansoor Ahmed offers a revisionist history of Pakistan’s nuclear program and the bureaucratic politics that shaped its development from its inception in 1956 until the 1998 nuclear tests. Drawing on elite interviews and previously untapped primary sources, Ahmed offers a fresh assessment of the actual and perceived roles and contributions of the scientists and engineers who led the nuclear program. He shows how personal ambitions and politics within Pakistan’s strategic enclave generated inter-laboratory competition in the nuclear establishment, which determined nuclear choices for the country for more than two decades. It also produced unexpected consequences such as illicit proliferation to other countries largely outside of the Pakistani state’s control.

As Pakistan’s nuclear deterrent program continues to grow, Pakistan’s Pathway to the Bomb provides fresh insights into how this nuclear power has evolved in the past and where it stands today. Scholars and students of security studies, Pakistani history, and nuclear proliferation will find this book to be invaluable to their understanding of the country’s nuclear program, policies, and posture.