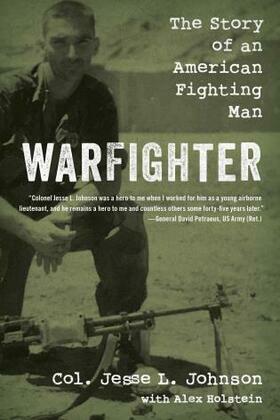 The Story of an American Fighting Man
by Jesse L. Johnson (Author), Alex Holstein (Author)
Buy for $27.50 Excerpt
Nonfiction Biography & autobiography Military History History by country United States Other Military
warning_amber
One or more licenses for this book have been acquired by your organisation details

In Warfighter, Colonel Jesse L. Johnson, one of the most decorated living American veterans, recounts the action-packed true-life tale of a man who stood and fought at the crossroads of history. Spanning forty years of conflict, from the jungles of Vietnam to the deserts of Iran and Iraq, never has a modern military memoir covered such a vast landscape of all-out warfare. Never has one man fought on the frontlines of so many of America’s most heroic battles. Johnson led the most elite forces on operations that defined eras past and present, mentoring young soldiers who would rise to become some of America’s greatest generals. He held the ear of princes, kings, presidents, and even Hollywood movie stars. With an all-star cast worthy of an epic war film, this extraordinary hero’s journey sheds new light on some of the most transformative events of our time—crises, conflicts and covert operations that have shaped the world as we know it today. More important, Warfighter offers us a deeper understanding of the personal sacrifice and human toll of a lifetime at war, and the honor-bound code of a man whose instinct in battle was to always charge ahead of those under his command—into the fight.