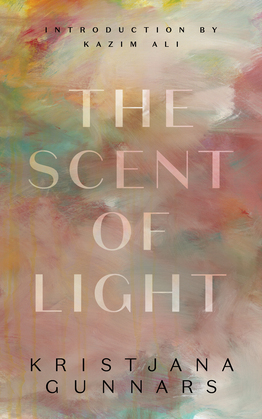 The Scent of Light

by Kristjana Gunnars (Author)
Buy for $15.95 Excerpt
Fiction Literary Contemporary women
warning_amber
One or more licenses for this book have been acquired by your organisation details

Kazim Ali introduces five autofiction novellas by Kristjana Gunnars—available in the U.S. for the first time, in a single, handsome volume

Between the late eighties and late nineties, Kristjana Gunnars published five transgeneric novels comprised of a scintillating blend of fiction, autobiography, literary theory, and philosophy. Elusive and poetic… rigorous yet passionate...these books were treasured by a devoted readership and have been lauded by critics throughout the years since.

— Kazim Ali, from the introduction

From a childhood in Cold War Iceland to love affairs and deaths, these short works document a life of perpetual motion, told a discontinuous, subversive style to reflect the singular, feminist, nomadic life of the narrator.

It is a life of thought, an ongoing engagement with writers from Proust to Kierkegaard to Kristeva, seeking and often finding a companionship in the writing of others. These five spellbinding narratives act as a bending bow, open to what life has to offer day by day and taking the gentler course, wherein nothing is forced and life’s big questions remain beautifully unanswered.

The Prowler is a reminiscence of childhood spent in Iceland, seen from a distance with the Cold War as a backdrop, just before the hyper-modernization of the mid-sixties, when the air of the past was still discernible. When an orange was a delicacy against the darkness. This is Gunnars’ most lauded novella.

Zero Hour is a contemplation and remembrance of the narrator’s father and his death. The narrative traces the course of the father’s illness and final moments, and confronts the reality and grief of absolute endings.

The Substance of Forgetting is ultimately about happiness. Set in a lush valley in central B.C., the narrator begins to awaken to possibilities of love and transcendence.

The Rose Garden is set in Germany and the narrator is on an academic exchange wherein all that happens are things that are not supposed to happen.

Night Train to Nykøbing is a darker exploration of life’s (and love’s) unknowns and the dangers inherent in choices we make. The narrator is travelling between Vancouver and Oslo in a continuous back and forth that gives rise to a sense of the liminality of life itself.

"The intimacy, grace, and intelligence of these narratives is remarkable. The mystery and quietude honours the beauty of the everyday as it passes, while simultaneously gesturing to vast other worlds. Often I was taken by its openings and distances, and a marvellous, almost translucent quality that permeates the texts. Oddly, at times it felt as if I were inside a whispering many-chambered shell – resonant, enclosed, pearlescent – the pleasure afforded, enormous." –Carole Maso, author of Ghost Dance

"From 1989 to 1998, the Icelandic-Canadian writer Kristjana Gunnars published five novellas, each detailing specific moments in the writer’s life. Gathered here for the first time, they offer a significant new strand of thinking about the rise of autofiction and the history of innovative women’s writing in Canada. If you loved discovering Annie Ernaux, you’ll love discovering Kristjana Gunnars." –Sina Queyras, author of Lemon Hound