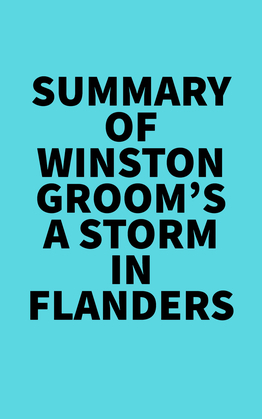 Summary of Winston Groom's A Storm in Flanders

#1 The origins of the First World War can be traced back to 1870, when Germany unified itself into a nation. Prior to then, Germany had been a collection of twenty-five kingdoms and principalities loosely governed by the state of Prussia, which was presided over by Kaiser William I.

#2 The last quarter of the nineteenth century was a time of world peace. The prosperous Gilded Age saw the development of the telephone, electric lights, automobiles, motion pictures, manufacturing advances, and luxury transatlantic shipping.

#3 Germany was also extremely concerned about its security. It had been in conflict with its neighbors almost since time immemorial, and in 1879, it forged an alliance with Austria-Hungary.

#4 The first thing Kaiser William II did after becoming emperor was to dismiss Bismarck, the man who had carefully laid out Germany’s foreign policy. He had long had his own ideas about how Germany’s future in world affairs should progress.