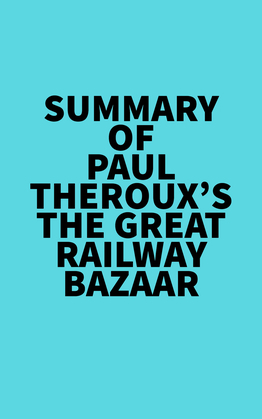 by   Everest Media (Author)
Buy for $3.99 Excerpt
Nonfiction Travel Asia
warning_amber
One or more licenses for this book have been acquired by your organisation details

#1 I wanted to travel by train from London to Tokyo. I found passengers who were willing to travel with me. Duffill was one of them. He was old and his clothes were far too big for him, but he had many oddly shaped parcels wrapped in string and brown paper.

#2 The train was speeding through Clapham. I had left England behind. The sky was old. Schoolboys in dark blue blazers, carrying cricket bats and school bags, were smirking on the platform at Tonbridge. We didn’t stop at the larger stations.

#3 I boarded the Paris Express, which was floodlit. I was comforted by the thought that I could get to the Kurds without getting into a packet again. I sat down with the roll-shredding couple, who explained that I'd have to ask the wine waiter.

#4 I was shocked by the cost of the meal, which was about ten dollars. I had my small revenge by leaving my newspaper on the table in the dining car. The waiter took it from me and said, This is your paper, before handing it back to me.