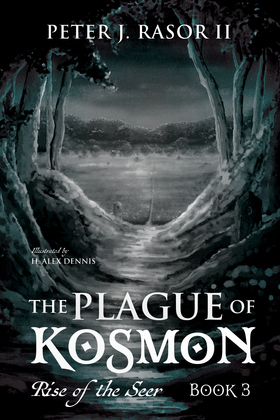 Rise of the Seer, Book 3
by Peter J.Ii Rasor (Author), H. Alex Dennis (Illustrator)
Buy for $19.00 Excerpt
Fiction Fantasy Epic
warning_amber
One or more licenses for this book have been acquired by your organisation details

The search is on! The world of Kosmon needs a cure for a plague that leads ultimately to everyone's death. The Scientian race, known for its rationality and understanding, continues to fail in finding a cure, while the Transmutant race, known for living by its emotions, turns its hate toward the race of Seers, attempting to wipe them out. Amid the search for a cure, Seikh, a young Seerean boy, is led on a journey to discover who he is and his purpose, which is ultimately to find the cure. The journey, however, is not without its troubles. Along the way, he encounters those who want to deceive him and others who want to help him. Will Seikh find the cure, or will he be deceived by dark forces, leaving the world of Kosmon forever plagued with death?