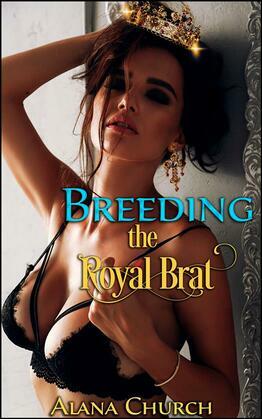 Princess Kitiara is due to be wed. But in order to marry, she and her husband-to-be must prove themselves fertile! Will Kitiara's desire for spankings and rough play in the bedchamber put her at odds with her fiance? Can she control her perverse desires? Because it's time for "Breeding the Royal Brat!"

“We have only common fare tonight,” Kitiara said. “But I do not think that will be too much of a hardship, will it, Lord Weyland?”

“In truth, princess, bread and cheese and good company are far superior to a banquet when your companions are bores.” Weyland stabbed a carrot with his fork, trying to control his temper. “But one thing I will say,” he added. “I have never been bored in your company.”

“Yes. My company.” Kitiara chewed thoughtfully. “The fortunes of your family have risen since the announcement of our betrothal. Your brother has found advancement. And my mother and yours have grown quite close in a short amount of time.

“What a pity it would be, if those fortunes should fall.” A cruel smile passed her lips. “Your brother would be reduced to a mere country knight. And how many allies would your mother have if royal favor was removed from Stonehill?”

“You…bitch,” he breathed. “You would do that, just because your feelings are hurt? You’re not a princess. You’re just a stupid little girl with a lot of jewelry.”

Kitiara nodded, wiped her mouth with her napkin, and stood. Satin slippers whispering, she walked around the table.

And then she dealt a backhand blow to his face that nearly knocked him off the chair.

“You will never speak to me again in such a tone,” she hissed. “I am Princess Kitiara Tanthalasa, you ignorant peasant!”

Weyland surged to his feet. “I will speak as I like, princess,” he snarled. “I may not be a flattering courtier. But at least my tongue is an honest one. And if you strike me again you’ll regret it.”

Kitiara laughed in his face. “What? Now you’re going to pretend you’re a man? Eleanora is more of a man than you are.” Her smile turned cruel. “Shall I show you what we brought back from our trip to Chernavog? It’s the cleverest little device. She buckles the straps around her hips, and it has the largest, thickest phallus I’ve ever seen. Much bigger than yours.”

“You’re a vicious little guttersnipe and I curse the day we met.”

She slapped him again. “What do I care what you-”

Her words were cut off as Weyland grabbed her wrists. Utterly infuriated, he fell into his chair, dragging her with him.

“Oh, no, princess,” he breathed. One hand tangled in the wild mane of her hair. The other reached down, yanking up the hem of her silk gown.

His hand whistled down, smacking across Kitiara’s ass-cheek. The blow stung his palm, and she bucked under him, spitting curses. But he didn’t stop. His arm rose and fell, fury and shame taken out on the woman who had made the last few days a living hell.

Weyland couldn’t tell exactly when it happened. But slowly he grew aware that Kitiara’s voice had changed. Rather than swearing bloody retribution against him and his family, Kitiara was moaning and whimpering.

He surged to his feet, dumping Kitiara to the ground. She looked up at him from the rumpled circle of her gown, her eyes wide. He grabbed her arms and hauled her to her feet, then fisted his fingers in the neckline of her gown and pulled.