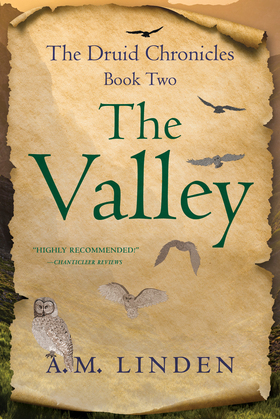 The Druid Chronicles, Book Two
by A.M. Linden (Author)
Buy for $9.95 Excerpt
Fiction Fantasy Epic Historical
warning_amber
One or more licenses for this book have been acquired by your organisation details

Llwddawanden is a hidden sanctuary where remnants of a once-powerful pagan cult carry on their ancient ritual practices, supported by a small but faithful following of servants, craftsmen, and laborers.

Cut off from the outside world by both geography and conviction, the Druids of Llwddawanden continue to venerate the Great Mother Goddess and to view themselves as the first-born and favorite of Her mortal children. While the belief that the most important of all divine beings gave birth to their ancestors and that Her spirit inhabits the body of their highest priestess is a tenuous conclusion in view of their reduced lot in life, the Druids of Llwddawanden believe it and are, for the most part, committed to carrying on the traditions handed down to them by their forbears.

Herrwn, the shine’s chief priest and master bard, has the responsibility of overseeing the education of Caelym, the orphaned son of the cult’s previous chief priestess, as well as keeping the peace within the upper ranks of their order—two tasks that grow more difficult as the rivalry over which of the three highest priests will claim Caelym as his disciple grows, and as mounting conflicts between the current chief priestess and her only living daughter threaten to rend the fabric of a society that has endured for more than a millennium.