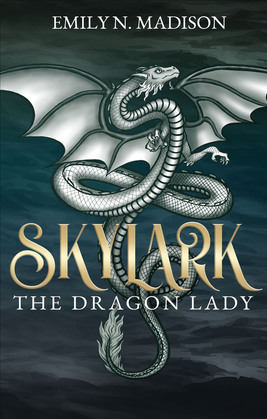 The Dragon Lady
by Emily N. Madison (Author)
Buy for $9.99 Excerpt
Fiction Fantasy Epic Historical
warning_amber
One or more licenses for this book have been acquired by your organisation details

Raised by seafaring pirates, Belladonna Skylark has never known her family. But she’s about to discover her destiny—a binding prophecy that makes her want to run and hide.

Pirate Captain Starlene was the one person Belladonna considered a parent—or, at least, a surrogate caregiver—on the Zodiac, which makes the captain’s death all the more painful. The loss of Starlene thrusts Belladonna’s life into the changing winds of leadership as she takes over command of the pirate ship. But her new role as captain is only the first of many changes that turn her world upside-down.

Not only is she rushed into learning the ways of a true pirate captain, Belladonna then finds herself tied to a prophecy she must fulfill, and not without numerous tests to her strength and character.

As Belladonna and her crew search for the hidden Isla del Dragon, Cornelius Blackfoot lurks in the shadows, and creatures Belladonna has never known begin to surface, ones that both compel and aggravate her journey.

Facing a destiny she cannot change, a betrayal by someone dear, and the stirrings of love pulling her away, it’s clear that none of this was made to be easy—especially as Belladonna’s heart grows black and bitter. But her desire to shirk the prophecy’s call could spell catastrophe for more than just herself, making the cost of cowardice too heavy to bear.

Skylark, The Dragon Lady is an epic, immersive tale that features fantasy world-building and dynamic characters striving against fate’s machinations.