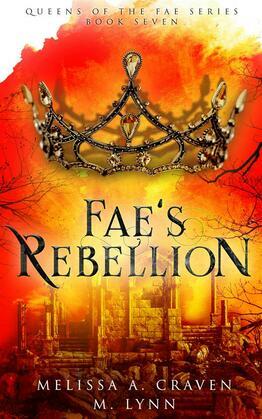 by M. Lynn (Author), Melissa A. Craven (Author)
Buy for €4.49 Excerpt
Fiction Fantasy Epic
warning_amber
One or more licenses for this book have been acquired by your organisation details

A powerful fae princess desperate to escape her future.

A broody prince holding her captive.

Tia O’Shea just wants to go home, back to the palace among snowy fields where her twin brother amplifies the power inside her, and her father tries to secure the future of the throne through her marriage.

A marriage she doesn’t want and refuses to consider. As a future queen, Tia only wants a choice in this one part of her life.

On the night of the ball to introduce all possible suitors for her hand, she escapes to the human realm, planning to return after everyone has come to their senses. She never expected anyone to follow her, let alone her best friend and two of her suitors.

When the portal home goes awry, she finds herself separated from the others, without her magic, and stranded in a kingdom she knows nothing of, a kingdom torn apart by generations of war.

Tia has been through her fair share of war, she knows what happens to those caught in the middle, but avoiding it might not be possible if she wants to find her friends.

To recover her missing magic and find a way back home across the treacherous fire plains, she might have to wade right into the fight.

But first, she has to escape the prince claiming her as prisoner.

Fae's Rebellion is the seventh book in the Queens of the Fae series. It begins the story of Tia O'Shea, a familiar face all grown up and struggling for independence in a world full of powerful magic and heightened expectations.