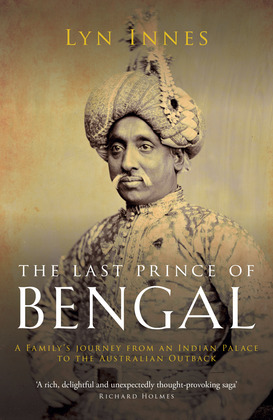 The Last Prince of Bengal

A Family’s Journey from an Indian Palace to the Australian Outback
by Lyn Innes (Author)
Buy for $9.53 Excerpt
Nonfiction Biography & autobiography Royalty History History by country Asia India
warning_amber
One or more licenses for this book have been acquired by your organisation details

The Nawab Nazim was born into one of India’s most powerful royal families. Three times the size of Great Britain, his kingdom ranged from the soaring Himalayas to the Bay of Bengal. However, the Nawab was seen as a threat by the British authorities, who forced him to abdicate in 1880 and permanently abolished his titles. The Nawab’s change in fortune marked the end of an era in India and left his secret English family abandoned.

The Last Prince of Bengal tells the true story of the Nawab Nazim and his family as they sought by turns to befriend, settle in and eventually escape Britain. From glamourous receptions with Queen Victoria to a scandalous Muslim marriage with an English chambermaid; and from Bengal tiger hunts to sheep farming in the harsh Australian outback, Lyn Innes recounts her ancestors’ extraordinary journey from royalty to relative anonymity.

This compelling account visits the extremes of British rule in the nineteenth and twentieth centuries, exposing complex prejudices regarding race, class and gender. It is the intimate story of one family and their place in defining moments of recent Indian, British and Australian history.

‘I was captivated and surprised by this bitter-sweet history as it twists and turns down three generations, through many astonishing changes of fame and fortune, from a glittering Bengal palace to an Australian sheep farm. Lovingly researched and meticulously told, The Last Prince of Bengal is notable for its candid revelations of British colonial attitudes and hypocrisies across two centuries. A rich, delightful and unexpectedly thought-provoking saga.’ --Richard Holmes

Lyn Innes explores her ancestors’ history in moving detail, capturing the tragic story of the dethroned princes of Bengal who had to make their lives in foreign lands, marked forever by the harsh legacy of Empire.’-- Shrabani Basu, author of Victoria and Abdul: The Extraordinary True Story of the Queen's Closest Confidant