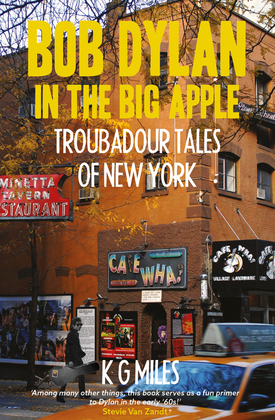 Bob Dylan in the Big Apple

A must have travel and music guide to Bob Dylan’s favourite New York city haunts.

Bob Dylan in the Big Apple will take you on a journey that Dylan took through the streets of New York in the early 1960s, looking at the locations, including the less trodden Dylan trails, the characters he befriended as well as revealing stories that formed the backdrop to his life and work.

We follow in his early footsteps into the Cafe Wha? as well as, more recently, the Beacon Theatre. Along the way we take in fighting on Elizabeth Street, the 'crummy' hotel, the tavern 'on the corner of Armageddon Street' and the Tuscarora Indian Reservation and more. We also take the Rolling Tyre Walk as well as the Talkin' Washington Park Square picnic.

With photographs and a map of the locations and wonderful stories this is a must for any Dylan enthusiast.

‘K G Miles has captured the vibrant spirit of Bobby's Big Apple career as well as looking into the nooks and crannies of the people, places and scenes of NYC. As one who was privileged to be there in those halcyon days I could not be more pleased. It's a great read.’ John Winn, singer, songwriter and old troubadour

‘This is your travel guide through time and space to the favorite haunts of the most celebrated folkie on planet earth. There is something magical about walking in the footsteps of our musical heroes. Whether it’s the Beatles in Liverpool, Leonard Cohen in Hydra or Bob Dylan in New York City, these pilgrimages can be vastly more rewarding than any planned vacation. Refreshingly non-academic, this book begins and ends at the Beacon Theatre, where Dylanophiles from around the world converge for a glimpse of the enigma that is Bob Dylan.’Kevin Odegard, musician, ‘Blood on The Tracks’