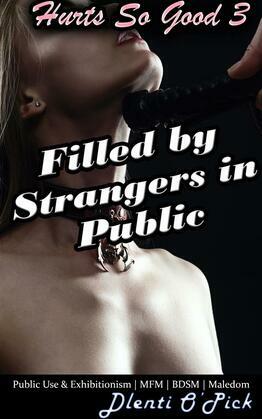 Filled By Strangers In Public

by Dlenti O'Pick (Author)
Buy for €2.99 Excerpt
Fiction Erotica Romance Adult
warning_amber
One or more licenses for this book have been acquired by your organisation details

Ally didn't set out to upset her Dominant. One thing just led to another and by the end of the week, she has broken so many Rules that she is practically begging to be punished.

Her Dom is as kind and gentle with her as ever when they are finally reunited, however, taking her apart piece by piece and putting her back together again with the same loving touch.

Honestly, that just makes her more angsty because she knows something is coming.

So, when she wakes with her hands and legs bound and him telling her that she'll suffer the consequences of her disobedience in the position, she's relieved. That relief is short-lived when he tells her that not only are they outdoors, but he intends to have his friends come and partake in her punishment. She will be spanked, filled, and taken in every hole and she's going to love every second of her humiliation.

Some days, Ally lashes out without thinking of the consequences.

Well, maybe she is thinking about the consequences and she's deliberately trying to earn a punishment, which is just weird because her self-preservation skills are normally pretty good, so she tries not to think about that too hard either. Her therapist will probably tell her that she's compartmentalizing and that isn't really dealing with her issues, but she's stopped seeing her therapist a few months after her eighteenth birthday because the guy started being super weird about the kind of therapy he wants to try on her.

There's also the fact that she got into a relationship with a man who's really good at actually helping her deal with her issues.

Which circles back to how she's ignoring the rules he set for her.

The whole point of the Rules is to make sure that she still functions properly when she's stressed, but she broke one rule and before she knows it, she’s breaking all of them.

She knows she will get in trouble if she doesn't clean up her apartment like her Dom had asked her to. That's not even her only digression from the Rules. She has been doing things all week to piss him off deliberately, having nothing for breakfast except for several too-sweet coffees and skipping meals instead of having well-balanced meals, ignoring his messages, ignoring his phone calls...

Honestly, she's practically begging for a spanking at this point. She should just bring herself to his apartment, yank her own pants down

and let him whip her back into shape.