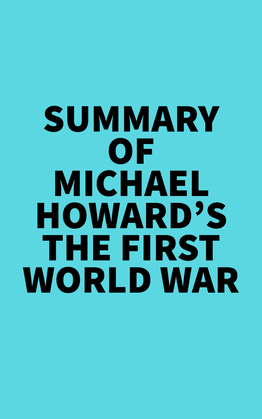 #1 The Great War of 1914-18 was a world war, and it was not the first. European powers had been fighting each other all over the globe for the previous 300 years. It began as a purely European conflict, but its course was so terrible and its consequences so catastrophic because of a combination of military technology and the culture of the peoples who fought it.

#2 The balance of power in Europe had changed dramatically by the end of the nineteenth century. The most powerful country was the German Empire, created by the Kingdom of Prussia in 1871 after its victorious wars against Austria and France.

#3 By the beginning of the twentieth century, Britain had already become a fully urbanized and industrialized nation. The landed aristocracy remained socially dominant, but the last vestiges of political power were being wrested from them by a House of Commons in which the two major parties competed for the votes of the middle classes.

#4 Between 1689 and 1815, Britain had been the world's major power, but after 1815, France became the rival that she had been before the Revolution. France remained both wealthy and culturally dominant, but her domestic politics were highly volatile.