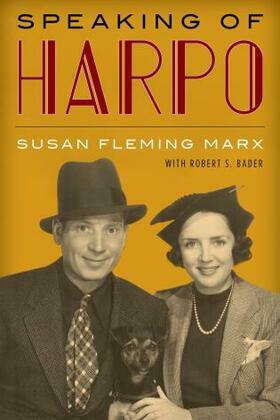 Susan Fleming appeared in three Broadway shows and twenty-eight films before she turned her back on a show business career she never really enjoyed or wanted. The role of her lifetime came when she married Harpo Marx in 1936. Together, they raised four adopted children and enjoyed one of Hollywood's happiest and most successful unions. But their twenty-year age difference made Susan a young widow in 1964.

On her path to Hollywood, Susan worked in Broadway musicals produced by Florenz Ziegfeld and George White and befriended a young dancer who would later be known as Paulette Goddard. In Hollywood, she appeared in films with stars like John Wayne, W.C. Fields, and Katharine Hepburn and worked at all the major studios. But it wasn't until she fell in love with a confirmed bachelor, twenty years older than her, that she found her purpose. Her story is the counterpoint to the beloved and acclaimed Harpo Marx autobiography, Harpo Speaks! Susan's frank, opinionated perspective provides a true look behind the curtain and details Harpo's last years, following the publication of his own book.