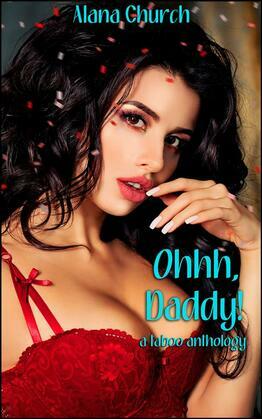 by Alana Church (Author)
Buy for €6.49 Excerpt
Fiction Erotica
warning_amber
One or more licenses for this book have been acquired by your organisation details

Good fathers take care of their daughters. But the best daughters take care of their daddies! Alana Church bundles four sexy tales of good girls who like to be bad! A pair of twins seduce their stepfather. Quarantine drives a cheerleader to taboo lust. A broken leg gives a man a very sexy nurse, and a god-daughter seduces the only man she's ever wanted! It's time for "Ohhh, Daddy!"

"Center field," he said, right before he threw the next ball in the air. Morgan's stance shifted the slightest bit, her left food sliding forward as she sent the ball flying in a line directly forward.

"I think that one took the pitcher's head clean off," Madison laughed, from her position a few feet away.

"Now right field," he instructed. Morgan shifted again, her hands coming forward quickly while the bat trailed slightly behind, punching the ball to the right.

It was something that Greg had taught the girls when they were still skinny and gawky with their teenage growth spurt. "Any fool can pull the ball. But all you will do with that is ground out to short and fly out to left. You need to be able to hit the ball where it's pitched. Line drives, girls. Line drives are the key. You don't have the muscle to hit the ball out of the park. Not yet, at least."

In only a few minutes, the bucket was empty, and Greg got up, leaning down to grab the loose balls at the other end of the shed to fill it back up. "Your turn, Maddie," he said, then halted, his eyebrows climbing toward the ceiling.

"What's wrong, Dad?" Madison picked her favorite bat from the rack and twirled it in each hand, rolling her shoulders. The motion made her breasts stand out, now only hidden from him by her black sports bra.

She looked down at her chest, then back up at him. "Oh. Sorry, Daddy. But it's just too hot in here. I'm all sweaty, and my shirt was sticking to my boobs." She smiled at him, dimples forming. "It doesn't bother you, does it?"

"No," he said, tearing his eyes away from her tan body, gleaming in the harsh fluorescent lights. "Of course not. Just warn a guy next time, will you? You'll give an old man like me a heart attack. Save that for your boyfriend. At least he'll appreciate it."

Madison stepped into the cage. "Are you saying you don't appreciate my body, Daddy?" She pouted, her lower lip sticking out. "That hurts my feelings."

He ignored her, tossing up the first ball. She swung violently, barely making contact, the ball popping up to fall with a dull thump a few feet away.

Morgan snickered, and Madison flushed. "You're pulling your hips out," Greg said. "Come on, you know better than that."

"That's something you're pretty good at," Morgan jibed. "Pulling your hips out, I mean."

He threw another ball. Her face set in concentration, Madison swung again, making solid contact, a screaming line, drive that hit low in the netting.

Morgan settled in beside him, one arm wrapped companionably around his waist as he fished another ball out of the bucket. "She's good, isn't she?"

"You both are," he replied, trying to ignore the pressure of her breast against his side.

Was his daughter not wearing panties? He swallowed, glad that the heat in the small shed would hide his guilty flush.