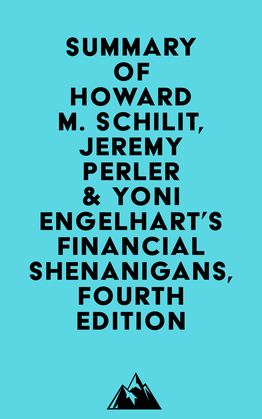 by   Everest Media (Author)
Buy for $3.99 Excerpt
Nonfiction Business & economics Accounting Financial
warning_amber
One or more licenses for this book have been acquired by your organisation details

#1 The lure of accounting gimmickry is particularly strong at struggling companies that are trying to keep up with their investors’ expectations or competitors’ performance. While investors have become more savvy to these gimmicks over the years, dishonest companies continue to innovate to find new tricks to fool shareholders.

#2 The trash hauler Waste Management Inc. inflated its pretax earnings by $1. 7 billion over a six-year period starting in 1992. The company was notorious for finding ways to inflate profits by deferring expenses to a later period.

#3 The practice of creating merger-related reserves continued in late 1997, when CUC was about to merge with HFS to form Cendant. In 1996 and 1997, investigators found more than $500 million of bogus operating income.

#4 Enron was a natural gas company that, within a few years, morphed into an enormous commodities trading company. Its revenues grew meteoricly, but its net income grew much more slowly. The company’s revenue was reported as if it were growth that was unprecedented, when in reality, it was just the company changing its business model.