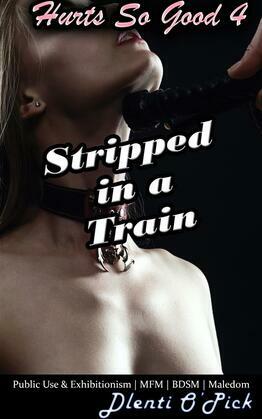 Stripped In A Train

Book 4 of 'Hurts So Good'
by Dlenti O'Pick (Author)
Buy for €2.99 Excerpt
Fiction Erotica
warning_amber
One or more licenses for this book have been acquired by your organisation details

Anna doesn't like using the public train, but after someone rear ended her car, she's left with little choice. That train is extremely crowded, so the first time the man bumps into her, she thinks it's just an accident, but then he does it over and over again and she realizes that it's not a briefcase that's jutting into her back.

With her right hand holding the bar handle above her head, she looks down at the book she's balancing with the other. The one good thing about not needing to drive is all the extra studying she is able to cram into her schedule. She used to listen to podcasts and audiobooks during her drive, but being able to read her textbooks ahead of class allows her a little advantage to her peers.

She needs to pull more hours at her part time job in order to get her car fixed, but that would mean even less sleep and she's already burning the candle from both ends as it is.

The train jerks to a stop and when the door opens, the incoming people push everyone forward, jostling her enough that she struggles to keep a grip on her book.

As more people create less space, a sudden lurch sends someone behind her to put a hand on her shoulder to steady himself. He retreats with a quick apology in a distinctively male voice.

"It's fine," she responds without thinking, used to the occasional accidental brush in crowded transits. She adjusts the grip on her book in her left hand and tightens her hold on the handrail, wishing she was a little bit taller so she didn't need to stretch so hard just to grab onto it.

There's a sudden jostle among the crowd and someone behind her presses against her shoulder blade before moving back swiftly with another murmured apology.

It may be the same voice, but she's not sure.

Anna wishes she had put her book back in her backpack when the train wasn't so full. Any attempt to keep her textbook away now will end up with her accidentally hitting a bunch of innocent passengers, so she keeps holding onto the overweight textbook and tries to focus enough to memorize the content.

The third time it happens, the hand lands on her lower back and stays there for a second longer than before. It withdraws with a now-familiar "Sorry again."

She shakes her head again, but she's starting to feel a little unnerved by how many times it's happened within the span of just a few minutes.

The fourth time it happens, the large hand lands on her left hip, large enough to engulf the span of her butt. This time, the man pulls his hand away without an apology.

She doesn't think it's an accident anymore, but at the same time, she doesn't know what she can do to make it stop either. There' no space for her to make trapped in the press of the crowd as she is.

Maybe she's overthinking it. Accidents happen and the guy would just have very bad balance.

And then, the hand palms her right butt again and this can't be unintentional because it goes under her short skirt, the calloused fingers moving up and down, rubbing her naked skin there.