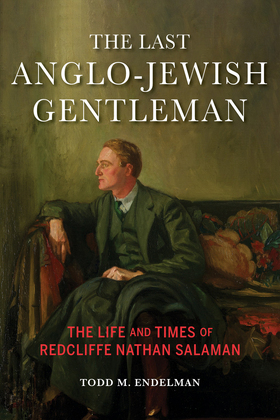 The Life and Times of Redcliffe Nathan Salaman
by Todd M. Endelman (Author)
Buy for $44.99 Excerpt
Nonfiction History 1799-before 1945
warning_amber
One or more licenses for this book have been acquired by your organisation details

Redcliffe Salaman (1874–1955) was an English Jew of many facets: a country gentleman, a physician, a biologist who pioneered the breeding of blight-free strains of potatoes, a Jewish nationalist, and a race scientist. A well-known figure in his own time, The Last Anglo-Jewish Gentleman restores him to his place in the history of British science and the British Jewish community.

Redcliffe Salaman was also a leading figure in the Anglo-Jewish community in the 20th century. At the same time, he was also an incisive critic of the changing character of that community. His groundbreaking book, The History and Social Influence of the Potato, first published in 1949 and in print ever since, is a classic in social history. His wife Nina was a feminist, poet, essayist, and translator of medieval Hebrew poetry. She was the first (and to this day, only) woman to deliver a sermon in an Orthodox synagogue in Britain.

The Last-Anglo Jewish Gentleman offers a compelling biography of a unique individual. It also provides insights into the life of English Jews during the late-19th and early-20th centuries and brings to light largely unknown controversies and tensions in Jewish life.