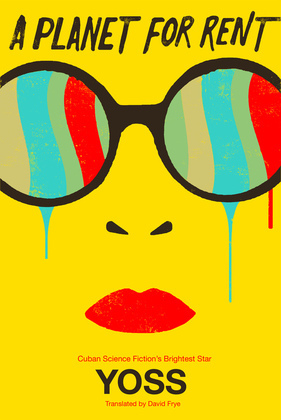 A Planet for Rent

by Yoss (Author), David Frye (Translator)
Buy for $14.99 Excerpt
Fiction Science fiction Space opera and planet opera
warning_amber
One or more licenses for this book have been acquired by your organisation details

“A Planet for Rent is the English-language debut of Yoss, one of Cuba's most lauded writers of science fiction. Translated by David Frye, these linked stories craft a picture of a dystopian future: Aliens called xenoids have invaded planet Earth, and people are looking to flee the economically and socially bankrupt remains of human civilization. Yoss' smart and entertaining novel tackles themes like prostitution, immigration and political corruption. Ultimately, it serves as an empathetic yet impassioned metaphor for modern-day Cuba, where the struggle for power has complicated every facet of society” —NPR, Best Books of 2015

Out of the modern-day dystopia of Cuba comes an instant classic from the island’s most celebrated science fiction author: a raucous tale of a future in which a failing Earth is at the mercy of powerful capitalist alien colonizers.

In A Planet for Rent, Yoss critiques life under Castro in the ‘90s by drawing parallels with a possible Earth of the not-so-distant future. Wracked by economic and environmental problems, the desperate planet is rescued, for better or worse, by alien colonizers, who remake the planet as a tourist destination. Ruled over by a brutal interstellar bureaucracy, dispossessed humans seek better lives via the few routes available—working for the colonial police; eking out a living as black marketeers, drug dealers, or artists; prostituting themselves to exploitative extraterrestrial visitors—or they face the cold void of space in rickety illegal ships.

This inventive book marks the English-language debut of an astonishingly brave and imaginative Latin American voice.