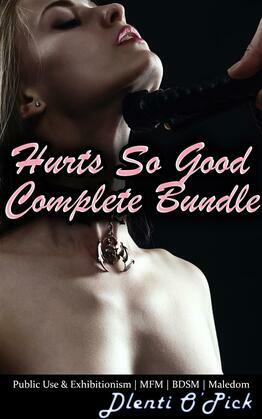 by Dlenti O'Pick (Author)
Buy for €7.49 Excerpt
Fiction Erotica Romance Adult
warning_amber
One or more licenses for this book have been acquired by your organisation details

In these four short stories, young women surrender themselves willingly to powerful men who lose no time humiliating and filling them up in every way imaginable.

When Erica first comes across the ad on the forum, she thought was some kind of sick joke. It sounds so terrible, so perverse. There's no way any sane person would agree to be humiliated and debased in such a way, filled up until they're bloated and then taken over and over by complete strangers…

She sends in her application.

Going to the park in the middle of the night with a vague description of what she's agreed to do isn't one of the best decisions in Jennifer's life, but what's life without a little risky adventure? Or rather, in this case, without a giant perverse adventure involving ropes, bondage, and being filled by too many strangers.

Filled by Strangers in Public

Ally didn't set out to upset her Dominant. One thing just led to another and by the end of the week, she has broken so many Rules that she is practically begging to be punished. So, when she wakes with her hands and legs bound, she's relieved. That relief is short-lived when he tells her that not only are they outdoors, but he intends to have his friends come and partake in her punishment.

Stripped in a Train

Anna doesn't like using the public train, but after someone rear ended her car, she's left with little choice. That train is extremely crowded, so the first time the man bumps into her, she thinks it's just an accident, but then he does it over and over again and she realizes that it's not a briefcase that's jutting into her back.

"Last chance to back out," Kim-something-or-the-other says. He has one of those pretentiously long names and the attitude to match.

She bristles. "I'm not a quitter."

"You say that now," Liam hums. "Most of the people who picked up our offer called it quits half an hour into it," he pauses, probably thinking he's said too much already. Setting her up for failure. "You get paid for only as long as you stay," he reminds her, as if afraid she would take him sharing how most people quit as permission to do the same.

"I'm not going to quit," she repeats, enunciating each word so it'll get into their thick heads.

"If you say so," Alan says, not looking convinced.

"Wonderful. Undress and get on your back, please," he says.