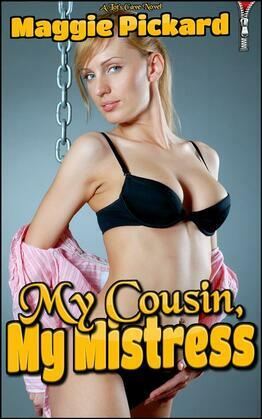 My Cousin, My Mistress

by Maggie Pickard (Author)
Buy for €3.99 Excerpt
Fiction Erotica Romance Adult
warning_amber
One or more licenses for this book have been acquired by your organisation details

Brenda's cousin John comes to stay with her while he is being evicted from his apartment. Things come to a head when Brenda finds dirty plates, cups and clothes all over the place and she confronts him about it. John finds out that although they may be cousins, Brenda can be very demanding.

By the evening everything was done, cleaned and put away. John came in from putting the last load of laundry away. He stood to attention in front of Brenda.

"You have stains on your jeans." she said, "Put them in the laundry.". He did so and returned in only his underwear. Brenda looked at him, standing there ready for her command. He had a great body and legs and she could not help staring at the bulge in his underwear. "Stop it." she said to herself, "You are related.". Her body, however, was starting to behave as if they were strangers. Brenda felt her insides knot up and her pussy started giving off signals. She suddenly felt herself get more sensitive and she could feel tingles as she rubbed against her shirt.