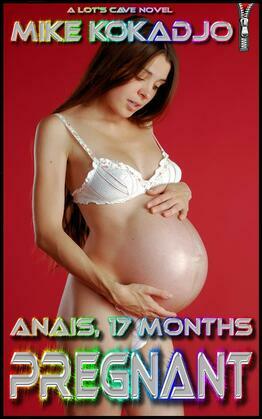 by Mike Kokadjo (Author)
Buy for €3.99 Excerpt
Fiction Erotica Romance Adult
warning_amber
One or more licenses for this book have been acquired by your organisation details

Anaïs looked down at her belly. She scanned her eyes down past her burgeoning body and outward, trying to understand the immensity of her flesh. Her belly thrust out but also filled to each side, a perfect sphere that appeared to be merging with the rest of her small body.

Already her belly was so large because of the seven uterine balloons she carried without complaint and without choice, so impossibly large that, in kneeling down, much of Anaïs’s belly spilled up and over her thighs. It was not fat; it was firm and taut and stretched beyond imagining.

Anaïs needed time and energy to raise herself up from lying on her back. She needed space and effort to shift from lying on her side to turning in her bed, her thin arms struggling to move her belly with her. Any move was a process, a laborious and conscious task to shift herself and her belly for the pleasure of the men around her.

When she waddled through the cabin, she risked knocking over objects on either side of her. The climb into the attic was genuinely frightening, as her belly rubbed against the two side walls of the narrow stairs.

When Anaïs moved through the cabin, her belly announced her presence and nudged aside any other attention. Even the pregnant properties turned to watch her, as she seemed to push her globe-like burden from behind the way a worker pushes a wheelbarrow.

She would become larger in service to her owner. Already she felt she was as big as an overdue woman carrying sextuplets. Sure, each baby was a bit smaller, but as the numbers grew, so did the uterus. Already Anaïs felt nearly comically large. Already she felt demeaned by her own body.

At least the others held in the cabin could comfort themselves in knowing they were genuinely pregnant. Anaïs could never be pregnant again. She could never become slim, then swell, then squeeze out her burden. She was always obscenely big, always pliant, always open to any cock that wanted her.

And now, scanning the equipment and locking eyes with the nurse, she slowly stood and moved to her bed, resigned to her fate.

“Don’t you want to know?” the nurse asked, one hand on her owner’s cock as she massaged and caressed him.

“I suppose,” Anaïs said, lying down at the edge of her bed, to ease the nurse’s task in rummaging through Anaïs’s flesh.