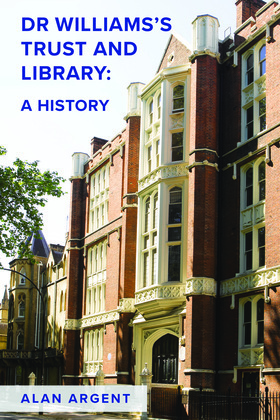 by Alan Argent (Author)
Buy for $29.95 Excerpt
Nonfiction History History by country Europe Great Britain <1799 1799-before 1945 1945-1989 Religion Christianity Protestantism History of religions
warning_amber
One or more licenses for this book have been acquired by your organisation details

This first complete history of Dr Williams's Trust and Library, deriving from the will of the nonconformist minister Daniel Williams (c.1643-1716) reveals rare examples of private philanthropy and dissenting enterprise.

The library contains the fullest collection of material relating to English Protestant Dissent. Opening in the City of London in 1730, it moved to Bloomsbury in the 1860s. Williams and his first trustees had a vision for Protestant Dissent which included maintaining connections with Protestants overseas. The charities espoused by the trust extended that vision by funding an Irish preacher, founding schools in Wales, sending missionaries to native Americans, and giving support to Harvard College. By the mid-eighteenth century, the trustees had embraced unitarian beliefs and had established several charities and enlarged the unique collection of books, manuscripts and portraits known as Dr Williams's Library. The manuscript and rare book collection offers material from the sixteenth to the twentieth centuries, with strengths in the early modern period, including the papers of Richard Baxter, Roger Morrice, and Owen Stockton. The eighteenth-century archive includes the correspondence of the scientist and theologian Joseph Priestley. The library also holds several collections of importance for women's history and English literature. The story of the trust and library reveals a rare example of private philanthropy over more than three centuries, and a case study in dissenting enterprise. Alan Argent illuminates key themes in the history of nonconformity; the changing status of non-established religions; the voluntary principle; philanthropy; and a lively concern for society as a whole.