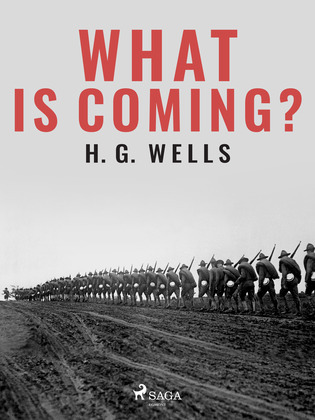 by H. G. Wells (Author)
Buy for $2.99 Download sample
Nonfiction History World War I Social science Political science
warning_amber
One or more licenses for this book have been acquired by your organisation details

Written on the eve of Allied Forces’ preparation for going into battle with Germany, this prophetic book can be read as a manifesto preaching peace amidst the horrors of the Great War. In ‘What is Coming?’ Wells puts forth the need for a world organization that would ensure a fair peace treaty that unfortunately did not take place after the First World War. The celebrated author correctly ascertains that Germany would strengthen after The Great War ends through exhaustion. Wells delves deeper into the financial and social traps that await the post-war world and predicts the rise of feminism and the fall of colonialism. The accurate predictions are impressive but the ones which did not take place may be even more interesting as Wells’ arguments for a socialist world order to provide basic needs remain relevant to this day. ‘What is Coming?’ is a thought-provoking and captivating window into a time that still impacts our world today. Teeming with prophecies, the book is a perfect read for First World War historians and the history of socialist thought.

H. G. Wells (1866-1946) was a celebrated English writer, remembered mostly for his science fiction works. Often described as a futurist, H. G. Wells’ influence cannot be overstated for his works foresaw many technological innovations such as space travel, the atomic bomb, and the Internet. A four-time Nobel Prize in Literature nominee, Wells explored a wide array of themes in his works, from religion to social criticism and beyond. Some of his best works include the time-travel novel ‘The Time Machine’, the sci-fi adventure novel ‘The Island of Dr. Moreau’, and the mankind-versus-aliens novel ‘The War of the Worlds’. Wells occupies one of the central seats in the canon of science-fiction literature and his writing inspired other celebrated authors such as Ray Bradbury and Philip K. Dick. Wells’ stories are still widely read to this day and have had numerous cinematic adaptations including ‘The Invisible Man’ starring Elisabeth Moss.