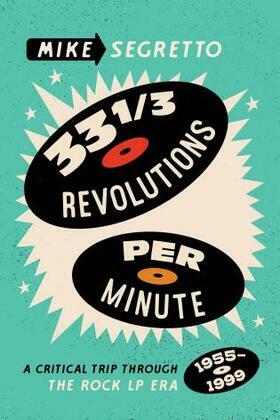 A Critical Trip Through the Rock LP Era, 1955–1999
by Mike Segretto (Author)
Buy for $38.00 Excerpt
Nonfiction Arts Music History & criticism Rock
warning_amber
One or more licenses for this book have been acquired by your organisation details

Whether you're a lifelong collector or have only just gotten hip to the vinyl revival, navigating the vast landscape of rock albums can be a daunting prospect. Enter Mike Segretto and his mammoth 33 1/3 Revolutions Per Minute, a history of the rock LP era told through a very personal selection of nearly 700 albums. Beginning with the birth of rock and roll in the 1950s, Segretto moves through the explosive innovations of the 1960s, the classic rock and punk albums of the 1970s, the new wave classics of the 1980s, and the alternative revolution of the 1990s, always with an eye to both the iconic and the ephemeral, the failed experiments and the brilliant trailblazers. It's all here: everything from the classics (Sgt. Pepper's Lonely Hearts Club Band, Purple Rain, Nevermind, and countless other usual suspects) to such oddities as albums by Johnny "Guitar" Watson, P. P. Arnold, The Dentists, and Holly Golightly. Throughout, Segretto reveals the perpetual evolution of a modern art form, tracing the rock album's journey from a vehicle for singles and filler sold to kids, through its maturation into a legitimate, self-contained medium of expression by 1967, and onward to its dominance in the '70s, '80s, and '90s.

Whether you read it from cover to cover, seek out specific albums, or just dip in at random and let the needle fall where it may, 33 1/3 Revolutions Per Minute is a fun, informative, and unapologetically opinionated read.