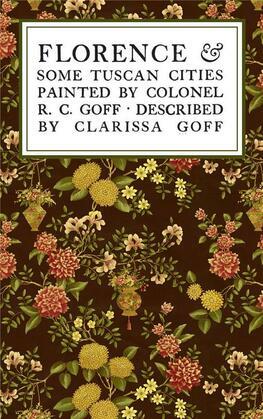 Book features about 75 illustrations, paintings by the Colonel Robert Charles Goff (1837-1922), and a text by Clarissa Goff, his second wife, describing the couple’s jaunts through various cities of the Tuscan region of Italy, where they viewed the architectural and artistic works so characteristic of the picturesque cites that include Florence, Arcetri, Fiesole, Prato, Pistoia, Pisa, Viareggio and Lucca, with anecdotes about the architects and painters, noble families and British visitors who played various roles in the history of Tuscany.