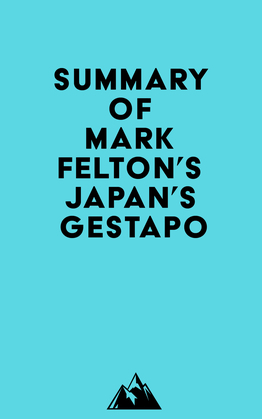 #1 The Kempeitai was an organization that was so loyal to Japanese ultra-nationalist militarism that it was known for its cruelty and its ability to torture prisoners. Its reputation terrified Allied prisoners of war and civilian internees, and its position of power seemed unassailable.

#2 The Kempeitai was the Japanese police force, and it was as brutal and sadistic as the Gestapo. It was responsible for running the country’s prisoner of war and civilian internment camp system, and under its control, the camps were as harsh and depraved as those run by the Nazis.

#3 The Japanese saw the threat of the European dog, and they knew that if they did not act, their culture and independence would be lost. They knew that the threat came from trade turning into economic warfare waged by the most ruthless means.

#4 The Chinese government watched as its economy fell piece by piece into Western hands, and watched as every attempt they made to reassert their authority was met with gunboat diplomacy. The Westerners protected their huge trade profits, and they were exempt from Chinese laws and punishments through the principle of extraterritoriality.