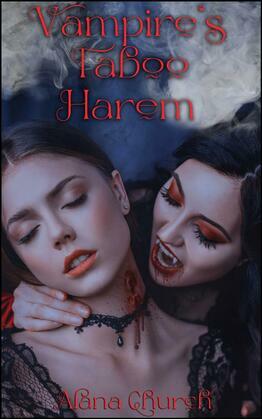 by Alana Church (Author)
Buy for €2.99 Excerpt
Fiction Romance Adult
warning_amber
One or more licenses for this book have been acquired by your organisation details

It was just supposed to be a night out with some friends. But Karen woke up to discover that she'd been transformed into a blood-sucking vampire! When the Hunger comes upon her, can she find the power to resist? Or will she become a monster in truth? Or will she discover that blood isn't the best thing you can drain out of your sexy son's body? Find out in "Vampire's Taboo Harem!"

"All done?" Danny asked. He flipped the can of furniture polish from hand to hand, grinning, and waved at the house. "We make a pretty good team, don't we?"

She didn't answer. Quick. She had to make it quick. And as painless as possible. She owed Danny that much, at least. He was her son. She loved him.

She saw the moment Danny realized there was something wrong. When he saw her fangs. "Mom? Mom?" His voice keyed upward, on the edge of panic.

"Don't worry, baby." Karen pressed forward, pushing her son up against the wall. It was amazing how strong she was, now that she had been turned. Dale wouldn't dare lift a hand to her now, if he were around. "It'll all be over soon."

She sniffed at his neck. Yes, there it was. The rush of blood, under his skin, flowing like a river. She tried to hold back, to stop. But the Hunger was too strong. Inwardly, she wept. She was too weak. She couldn't control it. She would feed. And kill. And then there would be no going back. Caught between her Hunger and bitter, agonized self-loathing, she would spiral into a pit of darkness and despair, until the soul within matched the monster without. She would kill and kill and kill. Until her own death came as a welcome release.

"Mom, what..." Danny pushed at her shoulders, but she was as immovable as a statue.

Yes. Let me be a statue. Stone doesn't feel. Stone won't grieve after you've killed the only person you love. Her belly growled, and she licked her son's throat, coating it with her saliva. As the soporific took hold, Danny's struggles slowed and his eyes became glazed and compliant.

She licked him again, loving the taste of him. For the second time in her life, she felt her fangs extend, pricking his skin. A single drop of blood swelled and broke, trickling down his neck. It fascinated her. So dark, so rich. So full of life. She licked it away, and her Hunger howled, the taste making her shudder in pleasure.

Yes. Her jaws opened, her mouth reaching up to drain her son of his blood. To take his life so she might live.

But then, at the last possible moment, before she was lost forever, she smelled it. Not blood. This was fainter, sweeter, more elusive. But at the same time, more potent.

The smell of male fertility. Of a man's seed.

Karen stood still for a moment, wracked with agonizing indecision. Within her, her Hunger roared, screaming for release, for blood. She leaned forward, then back again, fighting her primal need. For one instant her mind fought her way clear. If blood was the key to vampiric immortality, how much more potent would semen be? Could she feed without killing? Could she hold onto her sanity long enough to even make the attempt?

I am Karen Lewandowski. And I am more than my Hunger.