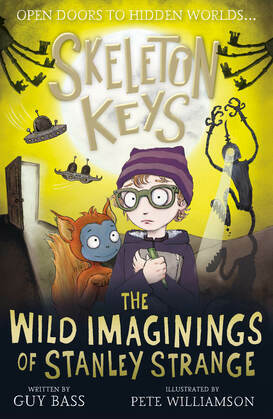 The Wild Imaginings of Stanley Strange

The fifth tall-but-true tale in the darkly comic series SKELETON KEYS from the award-winning duo behind STITCH HEAD.

Greetings! My name is Skeleton Keys and these fantabulant fingers of mine can open doors to hidden worlds… Join me for the puzzling tale of Lucky – an unimaginary who seems to have mislaid the very human that imagined him…

When Skeleton Keys discovers newly unimagined Lucky all alone, he’s determined to reunite the little creature with the boy who imagined him. But Stanley is nowhere to be found…

The search leads them to the Kingdom – a hidden world for unimaginaries. As they scour the streets for any sign of Stanley, the Kingdom comes under attack from a rampaging gorilla. Lucky is convinced it’s the work of Stanley’s wild imaginings. But what is Stanley up to and can Skeleton Keys track him down before the entire place is reduced to rubble…?

Perfect for fans of David Walliams, AMELIA FANG and THE NOTHING TO SEE HERE HOTEL.