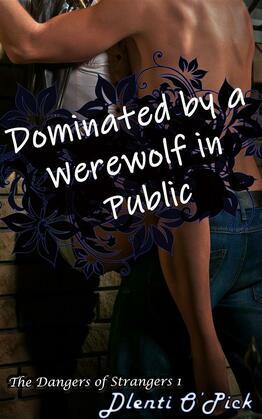 Dominated By A Werewolf In Public

At eighteen, Kira should really be old enough to know better than to follow a stranger into his car, especially right after he had mistaken her for a companion for hire. She is certainly dressed the part for the evening. She snuck out to have a good time and she's determined to get it. Except the older gentleman she had followed into the car is a lot more than he seems.

Kira should've known better than to believe her friends when they texted her to let her know that they had a sure way of getting into the club. None of them are twenty-one and she's the most baby-faced of them all.

She supposes it doesn't count as lying seeing as she's the only one who didn't make the cut.

The bouncer took one look at her, eyeing her up and down with lecherous eyes and barked a laugh.

She knows she's smaller than she looks. She's eighteen and looks like she's sixteen. While her friends could put on a sexy outfit, high heels and enough make up to age them up, she just looks like she's playing dress up with her mother's makeup set.

She peers over the man's broad shoulders and pouts forlornly at the music and dancing. She would really love to be in there.

"Come back when you've graduated high school, Kitten," he says, tossing her fake ID in the bin where dreams of overpriced alcoholic beverages and grinding bodies get to be just dreams forever.

"I have graduated high school!" she insists a moment too late, the fur on top of her head bristling with indignation. The people behind her in the line makes cooing noises at the sight of her all worked up. The fur on her tail is probably all puffed up too.

"Right," he says. "Run along home now, Kitten. Do you need me to call your parents for you?"

"Do they know you're here?"

Oh gods. He's serious. He might actually call someone in a position of power and then she would be in serious trouble. "I know my own way home," she bristles, baring her teeth at him. "I'm a student," she gestures at the faint silhouette of the university in the distance. It's within walking distance, which is what makes this bar such an attractive hangout destination.

He arcs a brow at her and she chews on her bottom lip to stop herself from flashing her student card at him. It clearly states on her student id that she had just turned eighteen. And also, there's an additional line on her card that requests the school administration be called if she were to leave campus.

There are so many unfair rules when it comes to Shifters like her.

She hasn't lost any of the baby fat on her cheeks and that combined  with her fair skin, wide blue eyes, and fluffy black ears and tail, make her look like a lost pet. People look at her on campus and peer around discreetly to see if she had come with an adult who had lost her in their negligence. It's ridiculous.